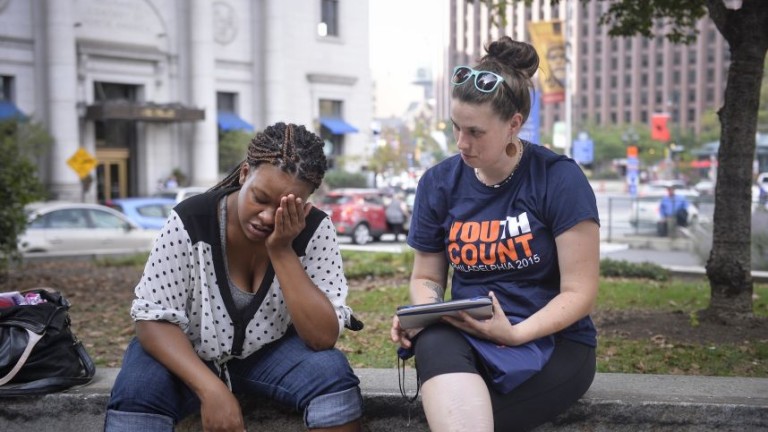 Metro Philadelphia featured the Youth Count on the front page of the paper on August 24! A new app, designed by Grassroots Unwired, debuted at the quarterly count held August 19 and is helping to more accurately survey youth experiencing homelessness in Philadelphia.

We’re so excited to be able to share the great work done by our Philadelphia staff in coordinating the Youth Count! Full text of the article is below. “The numbers are a snapshot of the current housing insecurity many young adults in Philly face,” says Valerie Johnson, Development Director for the Greater Philadelphia Valley Youth House (VYH), which on Monday will release a report on their first ever all-digital survey.

“We surveyed approximately 100 participants with only 50 percent fully completing the survey, so now we’re using better tools to strengthen our count logistics,” Johnson said. “There are roughly around 1,200 this year that are afflicted in this city alone.”

Last Wednesday, new electronic survey pads were used for the first time during an evening survey to properly track homelessness in real time.

Past surveys by VYH show that 54 percent of Philadelphia’s homeless youth identify as LGBTQ, drastically higher than the national average of around 30 percent.

“I don’t know where I’m going to live when the Pope comes, a lot of these shelters are already turning us away,” said Dashawna Pitts, 21, who has been homeless for the past year and was interviewed on Wednesday. Tears rolled down her face as she sat at LOVE Park, describing how she has not seen her 8-month year old son since giving birth.
“My foster parents kicked me out when they found out I was bisexual,” Pitts says. “They feared that I would influence my newborn and other kids in the house because of my homosexuality … I’m trying to keep my faith but it’s hard.”

“When I turned 21, my mother wanted me to find my own way – I was kicked out,” says Alex Covington, 23. Covington, who is now a transgender man, experienced instant homelessness while “transitioning without the proper support and outlet.”

“I squatted at some spots for a short while, hung out at The Attic often, but many of those places just helped me get by without adequate professional development and real support,” he says. “It was all fun, but I needed more.”

Once aware of the support group at VYH, Covington was able to use their resources to help pay his rent for two months while he was working to finance his surgical transitioning procedure and recovery.

“I gained full financial independence last November and Valley Youth House helped make that possible,” he said. He now works for the nonprofit as a part-time front desk receptionist.

“Our elected officials need to wake up and do more to support services and groups that are in these communities helping to fix this problem,” Covington added. “Otherwise, this is going to become an embarrassment of Philly.”

VYH relied on a coalition of youth outreach groups, including the Covenant House and Youth Emergency Service Philly, for their summer Youth Count. Throughout the evening, volunteers across the city used digital survey devices to help record information faster and avoid legibility issues that crop up with paper surveys.

“Spotting youth that suffer from housing insecurity isn’t as easy as one may imagine,” said Youth Count volunteer Hannah Righter. “It’s not just simply profiling people who are wearing old tarnished clothes and begging – but those who have been dwelling from house-to-house without a permanent residence.”

“A lot of factors play a role in why there’s a growing LGBT youth housing insecurity problem in Philadelphia,” said Sarah Morrison, PRIDE Life Skills Counselor for VYH. “Non-acceptance and family rejection are often prevalent ones.”

Get Involved
Make a donation